Read about a typical client’s experience of having counselling with me. 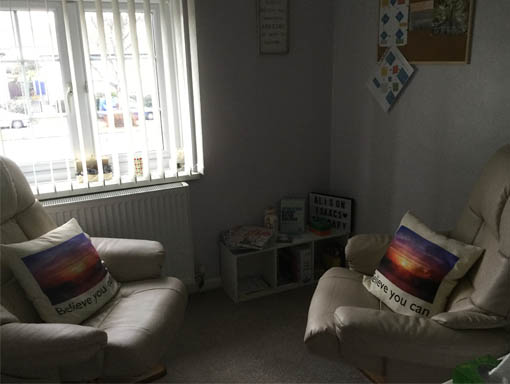 *Sharon contacted me for help with her severe anxiety. She was a little nervous about the counselling process and didn’t know what to expect, her parents had told her she was weak for seeking help and that she should just snap out of it. So with that in the back of her mind she was not sure if counselling could help.  I put her at ease by telling her a bit about my practice and explained that how coming to counselling isn’t an admission of failure and would be the best self-care and confidence booster she could give herself. She had a think and decided that it might be for her after all and booked an appointment for a few days later.

The day came for Sharon’s appointment and I was a little nervous too as I waited to find out what she would bring to the counselling room and how I could help her. I answered the door with a big smile and invited her in. As we sat down she said that she felt a mixture of emotions but felt happy and relaxed now that she had met me and made herself comfortable in the chair.

I asked Sharon to share with me why she would like counselling. As she started to tell me her story she said she felt overwhelmed as she didn’t really know where to start or how to explain her feelings. I reassured her that it was ok.

I knew just what to say and what questions to ask.

Sharon took a deep breath and began to tell me her story. My boyfriend left me 7 weeks ago and I have been feeling very low and really anxious ever since. I’ve been having panic attacks and bursts of anger, I just seem to let things bottle up and then I explode. I have trouble managing my emotions and haven’t slept properly for weeks. Multi-tasking is impossible and I’m struggling to deal with difficult situations at the moment.

He told me in the past that I needed help for my anxiety issues but I thought I was ok and now he has left because of the way I am at the moment. I feel so down on myself, like I drove him away. I was bullied at school and fell into a relationship with a boy who treated me badly and at university I met a man who violently abused me for 3 years. We had our own house and I felt I couldn’t leave. I eventually managed to get away and go back to my parents.  It seems that no matter what happens in my life I always make the wrong choices and decisions and end up on my own. I don’t have any friends, it’s like I put up a barrier to protect myself from the hurt I will eventually receive from them and I prefer to be on my own. I know this is making my situation worse and I want to get to a place where I am comfortable in other people’s company and not thinking the worst of them all the time. I don’t get much support from my family yet I’m always doing things for them and feel guilty if I don’t. It’s like I’m always seeking their approval. On top of all this I have a 6 year old son who has a form of Autism and is currently being tested for ADHD. He’s such a handful at times and I’m finding him difficult to cope with on my own.

Sharon felt better for getting it all out in the open but there seemed to be such a lot to deal with, she wondered where we would start and how I would be able to help her out of such a mess. I reassured her that we would go at her own pace in whichever direction she chose and that I would walk alongside her every step of the way.

Sharon breathed a sigh of relief as she sat back in the chair, she gave me a half smile and said she was looking forward to coming back next week, I reassured her that she wasn’t alone and that week by week we would make sense of her situation so that she could find a way forward.

Some weeks later during our ending session Sharon told me that she was so happy that she had decided to see me for counselling. Her anxiety was a thing of the past, she had been using the tools and techniques learnt in the counselling room and was putting herself and her son first. She no longer put pressure on herself to please other people, had learnt how to manage her emotions and had had no anger outbursts. She had even lifted her barrier and started to make friends and best of all, she finally got the help for her son that was so desperately needed.

We reviewed how Sharon felt at her first session and she said she no longer felt like the angry, anxious person she had been at the start, she felt empowered and was finally living for herself and her son and was a stronger person as a result.

As Sharon walked out of the door for the last time, I took a moment to reflect on our time together. It had been a privilege to walk alongside her and hear her story, and a great experience to watch her grow into the confident and happy person she had become. As I waited for the next lovely, brave person to walk through the door, I remembered why I love my job.

*Names have been changed to protect client confidentiality. Her difficulties, presenting problems and final outcome represent a typical client that I work with.